I’m not sure I can justify in words how this concert and experience meant to me but “time of my life” and “Absolutely Fabulous” seems the best I can come up with. Being a huge Bananarama fan since the early days of Cruel Summer I’m probably a bit biased, but I’m far from the only one giving it raves reviews. It was one big fantastic dance party. From the moment Sara, Keren, and Siobhan stepped on the stage with the lost Supremes classic “Nathan Jones” the crow stood up and never sat down. There was no distracting elements, no circus going on, just a video screen, a live band and three best friends celebrating and singing all the hits, fan favorites and more. The girls especially Siobhan looked like they were having the time of their lives, you could see the camaraderie and fun coming through unlike some pre-fabricated bands that seem to be just going through the motions. It felt like I was watching my best friends on stage reminiscing through the best years of their life. For those critics that see the girls as just karaoke singers this couldn’t be further from the truth. I never understood why so many people put powerhouse singers above all else, sometimes you just need to sing the damm song, no need for a million vocal runs or voice athletics, which I sometimes find gets tiresome. The set list was a dreams come true, with Siobhan coming on board I feared we might not hear songs like “Nathan Jones” or “I Want You Back” because she was replaced with Jacquie on those singles, but we got them and more.

The biggest surprise and most poignant moment was when the three sang “Cheers Then” and Siobhan briefly left the stage, leaving Sara and Keren to start belting out the mega Shakespears Sister’s  (Siobhan’s post Bananarama group) hit “Stay”. Speaking of vocal ability, Marcella’s Detroit part of that song is far from easy to sing and the girls did a beautiful job, the biggest applause though came when Siobhan entered the stage to sing her part. The image of them holding hands at the end in silhouette in front of the moon image on screen was so powerful, that some fans actually had T-Shirts made with that image taken from shots of the previous shows. I didn’t think it could get any better but after Stay, Siobhan announces that it was her turn to choose a song, it was her favorite track the girls did after she left the group, my favorite track too, “Preacher Man” which should have been a bigger hit from the Pop Life album. They did fan favorite singles including their social conscious songs “Rough Justice” and “Trick Of The Night” which had to be added back into the show after fans pestered Sara on twitter to bring it back when it was cut after the opening show of the tour. There were many songs that sounded better than the versions they recorded back in the day, including their first demo, the Latin tinged Swahili song “Aie A Mwana”, “Really Saying Something” and the Fun Boy Three duet “It Ain’t What You Do” which was slightly revamped with a fantastic swing 1950’s vibe. “I Can’t Help It” and “More Than Physical” was slightly disco-fied, even “Shy Boy” sounded better with each girl taking on separate verses while the other two did harmonies and back up. Nothing was a much fun as the Stock Aitken and Waterman section where most of the gay male audience broke into every dance and choreographed move they did from “I Heard A Rumour”, to “Venus”, and “I Want You Back”, it was a sight to see especially when some fans had the moves down pat, better than the girls. The few casual fans in the audience looked around a bit perplexed wondering if they missed the memo or why they weren’t in on the secret. The London show was filmed for a DVD release coming out in May, at one point during “Boy Trouble” the cameraman was filming next to me and turned the camera on me. “Boy Trouble” is the one song I don’t know well and to compensate I tried to do one of my Michael Jackson spins, but the floor was a bit slippery and I almost fell, the cameraman gave me a thumbs up anyways, now I’m wondering if I’ll make the cut, if not I’ll be happy to relive this incredible night, guilty as a girl can be. 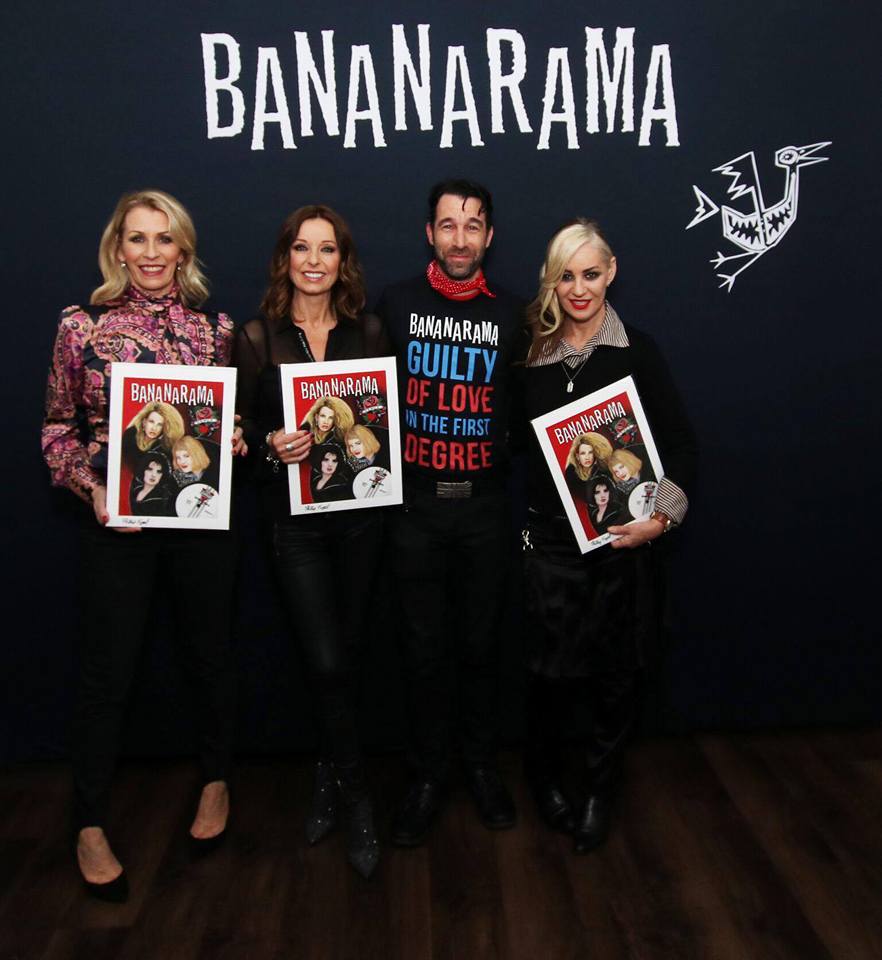 My experience was multiplied because before the show I got the chance to meet the girls and get my picture with them. The girls were absolutely amazing, stunningly gorgeous, and kind. I told them I came from Canada and I was there to celebrate my 50th birthday, Keren said something along the lines of “I looked great for my age”. They loved the T-shirt I designed for the concert, carefully checking out all the details.They graciously accepted the colour pencil tribute portrait I made of them. I had 3 prints done and was hoping I could give each girl a copy, they even posed with the prints in my picture.I was so nervous that I barely heard what they said to me, my friend Mike who was waiting in line, heard that Keren hilariously said, (about the portrait I drew), that her head isn’t that big. The photographer took many pics, including some of me as I was handing the prints to them. He even photographed me and Mike and our T-shirts as we stood in line. I thanked Siobhan for coming back and thanked Keren and Sara for keeping the legend of Bananarama alive. My hands were still shaking for about a half hour afterwards, I couldn’t calm down. While we were at the bar waiting for the show to start I was told that producer Pete Waterman was there, I was nervous but got the courage to go up and tell him I was a big fan and loved his music, he shook my hand. There were quite a few celebrities in the audience; I came this close to meeting Rick Astley only finding out afterwards he was there.

I’d like to thank the amazing Mike Devery for giving me this fabulous opportunity of a lifetime, cheers mate.

The Fans: I do have to say that my experience was that much richer because of all the fans I met from around the world, sharing that experience with them made it all the more incredible. The Saturday before the show there was a gathering for us to meet and it didn’t stop there, I met so many beautiful, kind and fabulous people throughout my trip of the UK. Bananarama really do have the greatest fans.

I was lucky to see the show a second time in Cardiff, this time I was closer to the stage in 4th row and I could see all their quirky interactions and facial expressions. The show was just as fabulous but the big difference was the audience, they seemed to be more restrained, subdued, a lot more seemed to be casual fans, nobody got up at the first song, everybody stayed quietly seated. When the girls finished the opener “Nathan Jones” they looked a bit perplexed and almost annoyed, thankfully they urged everybody to get up and dance. Bananarama is not a like going to the opera, it’s a party, a celebration, a time to let go.