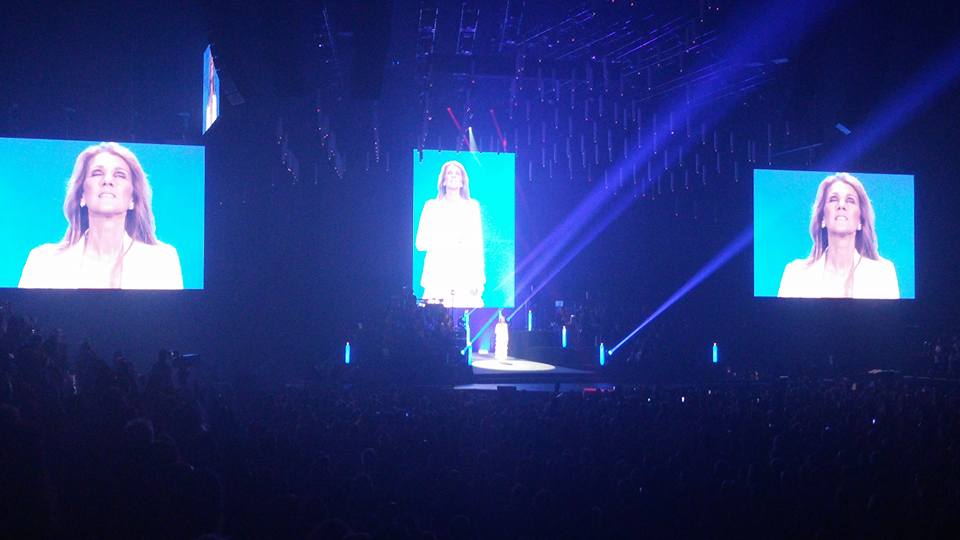 It was an honour and privilege to see this show. Celine’s mini tour of the summer of 2016 will be talked about for many years to come. I have to admit I was not thrilled when I first saw the setlist from Belgium and France, my setlist would have been quite different, so many of my favorite songs were missing, and many were rarer album tracks and songs she doesn’t often sing. I would have replaced 10 songs with others, but what I heard totally blew me away. I was excited to see a show of hers mostly in French, because let’s face it her French recordings with a few exceptions totally outclass her English repertoire in soul and artistry. Her Las Vegas show is all very “American” high gloss while this show had emotion, subtlety and class. Without singing a note Celine walked on stage, after reciting a snippet of the poem, “Trois Heure Vinght” behind a hidden screen to a 10 minute ovation. She could barely start the first song and new single “Encore un soir”. The song was written by her long time songwriter and collaborator Jean-Jacques Goldman. She asked him to write her one more song, this time about the passage of time as a tribute to Réne. She stood on stage for 2 hours, no wardrobe change, Celine wanted to spend as much time and sing as many songs she could for her fans. She could barely hold back the tears especially when she sang “Et je taime encore” the applauses stopped her right before the refrain for a good 5 minutes. Her orchestra with a full string section was breathtaking; this is what a real concert should sound like, no theatrics, just fabulous music, and an incredible vocalist, the real original definition of a “Diva”. She premiere a new song which was voted by the public to appear on her new album, written by unknown songwriter Daniel Picard, the song “À la plus haute branche” was stupendous; you could hear a pin drop. Even songs like « Tous les blues sont écrits pour toi » which is not a favorite of mine sounded better than the record and will make me revaluate them. “L’amour existe encore” and “Pour que tu m’aimes encore” was sung with maturité and beautiful vocal restraint. One of the cleverest moments of the night was her new version of “Naziland, ce soir on danse” from Luc Plamondon’s big rock opera Starmania. Céline had asked her producers to figure out a way to incorporate Réne’s favorite TV show and theme song “Law & Order” into a song, when she explained it I thought it was crazy but the result was fabulous. When I heard the first notes of “Dans un autre monde” I couldn’t help but get up and dance, but as I looked around the forum I could see I was only one of 5 in the stands standing up and boogieing, most preferred to sit as it was a ballad heavy list. One of the evenings highlights was the acoustic medley of “Apprends-moi / Tous les secrets / Ne bouge pas and Valse adieu”, Celine along with her back up singers and a few musician, did a type of campfire sing along which was as worthy as the full orchestra tracks, the ending with just her and the singers doing “Valse adieu” was incredible, it took me a few minutes to realize it was all accapella. I did get up again when she sang “Love Can Move Mountains” into “River Deep, Mountain High”. She obviously did the huge English hits “Because You Loved Me”, “It’s All Coming Back to Me Now” which morphed into “The Power of Love”. I cried when she sang “It’s All Coming Back to Me Now”, it reminded me of the last concert of hers I saw in 1996 with my then best friend Chris D. my friend has chosen to no longer be around and it just stirred up emotions. She covered “Purple Rain” and her new recorded version of Queen’s “The Show Must Go On”. As a unique twist to our night, she asked us for a favour at the encore. She had to record “My Heart Will Go On” for an American TV show and asked if we could be part of it. The show briefly stopped as she explained that there would be camera cue’s, she would talk to the American audience in English, then sing the song.  She asked us to light up the stadium with our cell phones, hoping that we had enough power left over; that along with glow sticks they were selling at the kiosque produced an incredible sight. The show ended with her love and peace pledge “S’il suffisait d’aimer”, she then sang an accapella snippet of “Vole” and faded into the background as the lights went down.
I really hope this concert is recorded and is set to appear on CD and DVD, not everybody got the chance to see it live, and some of us want to experience it again.