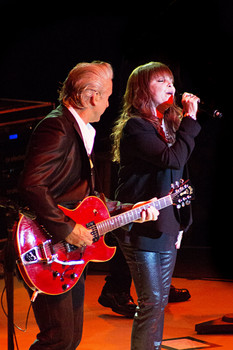 The show called for 7:30 and ten minutes in (which seemed needed to get people to their seats) she hit the stage playing for about an hour and a half. From the first licks of “All Fired Up” the show never stopped rocking. I have to admit I was a bit confused since they advertised the Victoria show as an acoustic one, but for once am I glad that was a false advertisement, acoustic can be cool but Benatar fans like to see her rock. In 1986 at the height of her career, my best bud and I got tickets for her “Seven The Hard Way” tour at the Montreal Forum. That’s why when she said this next song is from “Seven The Hard Way, I reverted to that 19 years old kid seeing Benatar for that first time, as “Sex As A Weapon” started I could not help but mimic the video with my hands in “The Supremes” stopping motion. I wanted to dance but nobody was getting up, Victoria audiences really suck, how can you be that subdued at a Benatar concert? By the time “Hit Me With Your Best Shot” came on a few of us got up and never sat down. My only complaint is that I found the setlist at 13 songs a bit short. Most concerts at this price usually have close to 20 songs. She sang her 4 top ten singles from “We Belong” to Love is a Battlefield but a few other hits like the fabulous “We Live For Love”, Fire and Ice, and “Shadows Of The Night” a favorite, was missing. Promises In The Dark was a definite highlight, I never really loved the song that much till that night. “Hell Is For Children” was poignant and incredible, she mentioned they sing that song at every show and will continue to do so until this horrible crime stops. Some of the deeper cuts like “Everybody Lay Down” was fab, but “So Sincere” and “Let’s Stay Together” could have been replaced with so many better options, anything from Tropico or Seven The Hard Way. What I wouldn’t give to hear “Run Between The Raindrops”. The finale which incorporated Jonny Cash’s “Ring Of Fire” with “Heartbreaker” was genius; maybe she should cover the song on a future album?