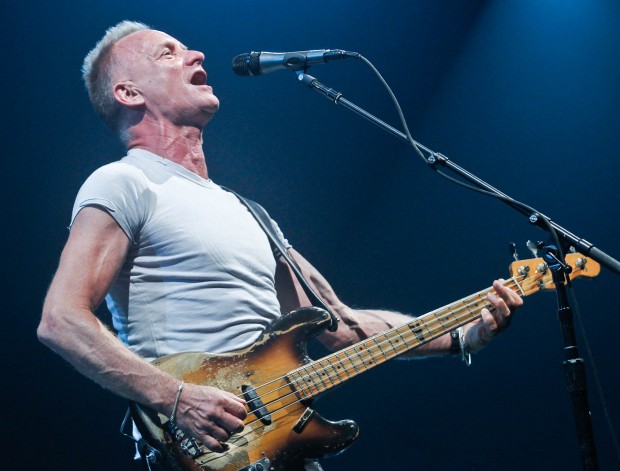 Don’t be late to Sting’s Back To Bass Tour, the show called for 8:00 and at exactly 8:10 without any opening act or build up, he is on stage playing the first bars of “If I Ever Lose My Faith In You”. Not sure if it’s the Save On Food Memorial venue, the incredible band or both but sound and acoustics were the best I’ve ever heard in a long time. “Every Little Thing She Does Is Magic”, sounded better the original recording. I could hear every sound and instrument clearly. His voice hasn’t aged; it was pristine, he held some long notes that only a few Idol divas can do that took me by surprised. He was definitely in top form rocking the stage like it was the 80’s, the band was superb check out the incredible violinist that does a few solos. “Englishman In New York” had an brief instrumental remix break that I just loved. Most songs sounded faithful, but I was a bit disappointed with “Wrapped Around Your Finger”, I’m, not a fan of slowing down songs, it sounded like a drugged down reggae version, however the light show during the song was really cool. “Roxanne” was slightly different but I couldn’t put my finger on what it was, then in the middle of the song it took a strange jazzy turn only to go back into the original by the end, I can’t forget the blinded red light that shined throughout the song. My big complaint always goes to setlist. He did a big cross section of his career but there was too many album tracks that I didn’t find that interesting, I could have done without “I Hung My Head”, “Driven To Tears”, “Next To You”, “Heavy Cloud No Rain”, and “The Hounds Of Winter”, from his least successful album Mercury Falling, I know there is a fine line between just doing Greatest Hits and fan favorites but I felt he lost the crowd, are any of these liked that much? Why would he completely ignore his Grammy nominated hit making solo record “The Dream Of The Blue Turtles” he did not play one song from it, Does he hate “If You Love Somebody” that much? “All This Time” is cute but he could have done so many other singles instead. He did 2 encores, “Desert Rose” followed by “King Of Pain” and “Every Breath You Take” was just magical. The show ended with the mellow moment of “Fragile”, just a few minutes shy of 2 hours.

A review by the Times Colonist said he played “Walking On The Moon” but unless I was sleeping I do not remember him playing it.

2. Every Little Thing She Does Is Magic

12. The Hounds Of Winter

13. Wrapped Around Your Finger

19. Every Breath You Take